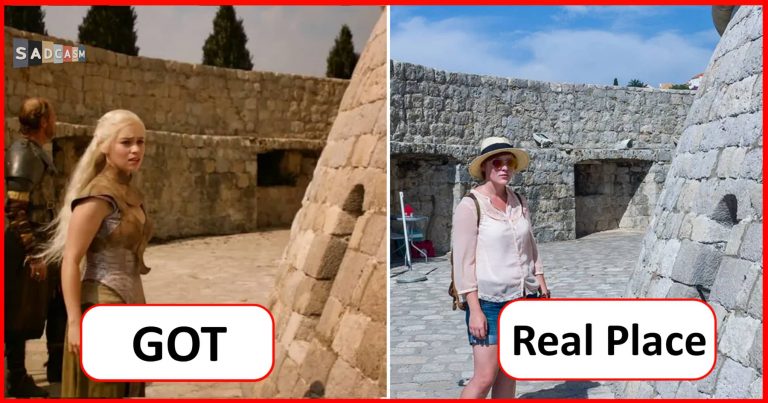 Can’t get enough of Game of Thrones? Well, you’re not the only one in this state. Over the course of its all 7 seasons, this show has taken almost entire world into its own world. In fact, people are still lost in its older world even when 8th, the final season, of Game of Thrones has been released. Though this renowned series has many things to leave the audience rapt, it is its unworldly filming locations that spellbind people in its enigmatic maze.

No, we don’t lie. You yourself go through the Instagram feed of German travel blogger Andrea David, who has recreated the iconic scenes from the iconic show the ‘Game of Thrones’.

Dany looking for her dragons.

Remember that big stone castle, where Dany looks for her dragons? Yes? Well, it is in Qarth, Dubrovnik.

Jon holding up a puppy ghost

This scene scares really. Isn’t it? Well, if you’re curious to know where it is,  it is Tollymore Forest in Northern Ireland.

I’m sure you can’t forget this romantic scene. You also want to go for a long walk in this beautiful garden. Well, then you have to go to King’s Landing.

Yes, Andrea has captured this famous Dark Hedge too, where David visited with his gang.

Remember Cersei’s long climbing of the Great Sept of Baelor? Well, it is also in Dubrovnik.

Yes, that steep and rambled road. You know where it is? Well, it is in Girona, Spain.

The place, where Daenerys and Drogo went after their wedding

No idea where they went? Well, it is Gozo, Malta.

You know this Ice scene was filmed in Myvatn, Iceland.

When Theon is disappointed and all lost

Here,we felt sorry for  Theon.  No? But, the background scene of Ballintoy Harbour, Northern Ireland had surely enticed us. Yes, the scene was shot there.

Jon and Drogo together in a cliff

Another scene from Northern Ireland. They are actually standing in Dragonstone cliff, 600 ft above sea level.

Maybe, you want another scene from GOT shot in Dragonstone cliff.

How can we forget this scene. No? It was actually filmed in Dubrovnik, Croatia.